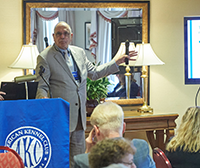 Mr. Prager was active in animal welfare and particularly canine issues by avocation and throughout his career and authored improvements to federal, state, and municipal dog laws.

An attorney by training, he served as General Counsel and Executive Director of New York City Animal Care and Control. After retiring from this position, he worked on the national staff of the U.S. Department of Agriculture’s Animal and Plant Health Inspection Service Animal Care Division, which is responsible for oversight and enforcement of the federal Animal Welfare Act.

Mr. Prager additionally served on the Pennsylvania Governor’s Dog Law Advisory Board and, for more than a decade, as the Legislative Chair of the Pennsylvania Federation of Dog Clubs (PFDC). In this capacity, he worked closely with the AKC GR department and a team of concerned individuals from Pennsylvania. Together with his team, he was responsible for evaluating proposals for the federation, educating about canine legislation issues, and establishing a position for the Federation.

When Pennsylvania Dog Laws were rewritten in 2008-2009, Prager was on the front lines, meeting with members of the General Assembly to assure that responsible breeder’s perspectives were heard.  When the supporting regulations were being written, Prager also provided valuable input to the Independent Regulatory Review Commission, ensuring that the PFDC and Pennsylvania dog breeders had a voice in the development of those regulations.

Most recently, he drafted language that became the Healthy Dog Importation Act (HR 6921), a measure strongly supported by AKC and NAIA that “establishes health and vaccination requirements for all dogs imported into the U.S. and promotes interagency coordination to address regulatory authority over such imports.

The American Kennel Club presented Mr. Prager with the AKC’s Bebout Award for Legislative Leadership in 2020. “Julian Prager is one of our unsung heroes,” said Sheila Goffe, Vice President, Government Relations for the American Kennel Club.  “Through his policy efforts, whether in New York City, at the U.S. Department of Agriculture, in Pennsylvania, Washington, D.C., and in many other locations and contexts, Julian has been a great friend to dogs and a protector of the rights of responsible dog owners.”


3202 1
Please do not close this window. You will need to come back to this window to enter your code.
We just sent an email to ... containing a verification code.