THE PROBLEM:
Iowa has some of the highest income tax rates in the country.

If those two items don’t happen, rates will remain high until those targets are met.

Tax rates matter
The tax bill passed by the legislature during the 2018 session was a great step toward rate reduction, sales tax modernization, and conformity with federal tax code, but there is much work left to be done.

Under the initial individual income tax cut that reduced the top marginal rate to 8.53%, Iowa still has a higher rate than every border state but Minnesota. Iowa’s corporate income tax rate is 12%, which is also higher than every state that borders Iowa. With many cities located along Iowa’s borders, this difference matters. 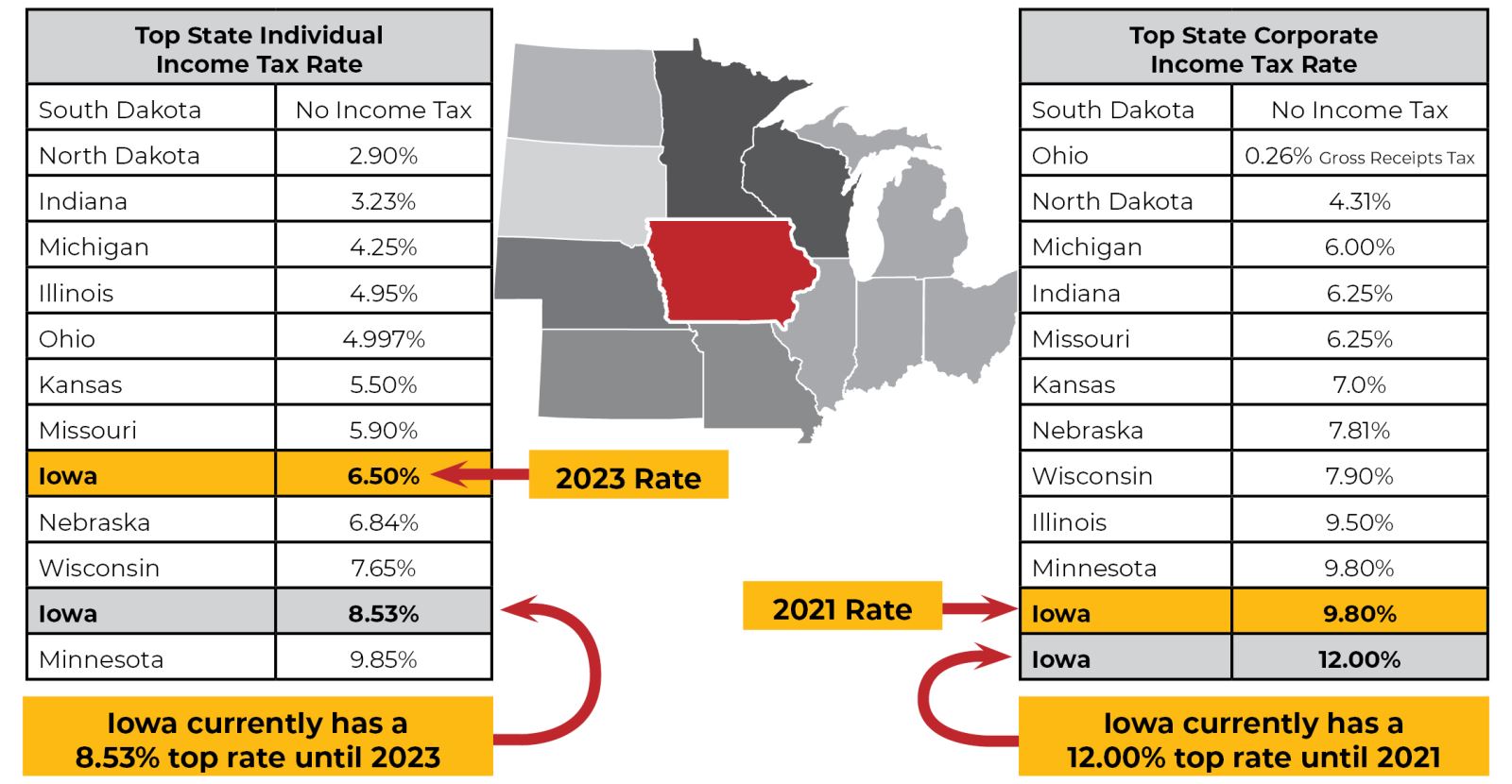 While progress has been made, Iowa is still lagging behind neighboring states. When people and businesses see more desirable rates across the border, many opt to locate on the side that costs less to live and do business. Individuals, entrepreneurs, and businesses will vote with their feet by moving to states with the best regulatory and tax climates.

A great example of how tax rates affect our state is the stark contrast between Sioux City, IA, and Sioux Falls, SD. South Dakota does not collect individual or corporate income taxes. Separated by the Missouri River, these cities are only a little over an hour apart. Since 1990, Sioux City’s population has grown 2.6% from 80,505 to 82,568. Over that same time period, Sioux Falls’s population grew 69% from 100,814 to 170,401.

While eradicating income taxes in Iowa is not feasible at present, legislators must look at ways to become more competitive with border states. The 2018 tax bill, if fully implemented, would reduce personal income tax rates below neighboring Wisconsin and Nebraska to a top rate of 6.5%. Unfortunately, the triggers within this legislation make that reality impossible until 2023 at the earliest and only if those triggers are met at that point which, at present, looks unlikely. Additionally, the cut in the corporate tax rate would leave Iowa with a top rate of 9.8%, which is still higher than every state that borders Iowa.

Triggers are a reasonable protection, but continuing to subject Iowans to high tax rates while praising tax cuts that may never happen is disingenuous at best. It is imperative that legislators evaluate the triggers passed into law to determine if the long timeline and extremely high threshold for enacting the larger tax cuts still make sense. Rhetoric praising tax cuts means nothing if those cuts never happen.

Iowans deserve better, which includes allowing them to keep more of their hard-earned money and giving them the tax cuts they were promised.