Tell Congress to Reform Mining and Mineral Leasing Laws That Endanger Public Lands
We need your help to push Congress to reform century-old mineral leasing and mining laws that endanger climbing areas and public lands around the country. 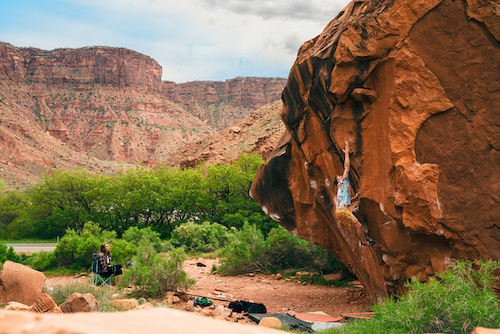 Last month, we rallied the climbing community to push back against a Bureau of Land Management (BLM) auction that aimed to put more than 85,000 acres of recreation-rich lands around Moab, Utah, up for lease to oil and gas companies. These proposed leases would have impacted some of Moab’s most well-known climbing areas, forever altering the climbing experience. The BLM ultimately canceled the Moab leases under the pressure of the climbing community and our partners, but similar auctions can occur in the Arctic National Wildlife Refuge and elsewhere across the American west.

The mineral leasing system for America’s public lands, which includes oil and gas development, gives the BLM broad discretion to determine when, where, and how to lease public lands. When combined with the presidential administration’s aggressive “energy dominance” agenda, this broad discretion is a recipe for disaster for public lands.

Public lands are kept in trust for all Americans, and it is critical that all values—including recreation, conservation, and cultural resources—are considered before decisions are made to lease public land to private industry. Instead of taking a balanced approach to energy development, the administration has implemented policy changes that allow them to fast-track leasing, bypass environmental reviews, diminish local stakeholder concerns, and ignore the conservation and recreation values of public lands.